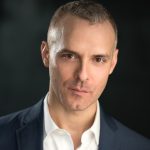 As an actor, Aubrey has appeared internationally in Love’s Labor’s Lost at the Royal Shakespeare Company in Stratford-upon-Avon, Off-Broadway in the world premiere of The Liar by David Ives at Classic Stage Company, and in 13 productions as an affiliated artist at the Tony Award winning Shakespeare Theatre Company in Washington, DC, including King Lear directed by Bob Falls, Mercutio in Romeo and Juliet, and Octavius Caesar in Antony and Cleopatra.

Other credits include the title role in Hamlet and Tom in The Glass Menagerie (Denver Center Theatre Company), Prior Walter in Angels in America (Wilma Theater), An Enemy of the People (Goodman Theatre), and productions at the Old Globe, South Coast Rep, Kennedy Center, Studio Theatre, Signature Theatre, Woolly Mammoth Theatre Company, Round House Theatre, Folger Theatre, Ford’s Theatre, and Theatre J, among others.

Television credits include Ridley Scott’s “The Man in the High Castle,” “True Blood,” “The Wire,” “The Mentalist,” “Castle,” “Backstrom,” “NCIS,” “NCIS: New Orleans,” and “Crisis,” as well as the films So the Lord Must Wait, A Matter of Time, Distance, Leave No Marine Behind, and The Seer.

Aubrey is passionate about actor training and works as a teaching artist with an emphasis on Shakespeare and the performance of classic texts, Acting, Acting for the Camera, Scene Study, Voice & Speech, and Audition Techniques for TV & Stage. He is a member of the National Alliance of Acting Teachers and has taught at Dean College, Stella Adler Studio in LA, and AMDA College and Conservatory of the Performing Arts. He is a former Kenan Foundation Artist-in-Residence at The Kennedy Center in Washington, DC, a Boomerang Fund grant recipient for excellence in the arts, and a proud, long-serving member of Actor’s Equity Association and the Screen Actors Guild/American Federation of Television and Radio Artists.

He received his undergraduate degree from the School of Drama at the University of North Carolina School of the Arts and his MFA from the Old Globe and University of San Diego Shiley Graduate Theatre Program.