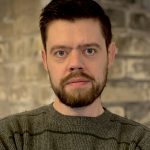 Danny has been a proud Actors Equity associated regional actor for over 10 years. He has coached professional actors and has taught workshops at many different levels. He received his BFA in Theatre from the University of Alaska Anchorage then moved across the country to study at the Florida State University/Asolo Conservatory for Actor Training where he received his MFA. He then took his talents to New York where he auditioned like mad, landed some amazing roles, and co-created a theatre company named The Night Shift that is still producing work in NYC. Continuing the trend of moving across the country he then transplanted to the San Francisco Bay Area of California where he worked with numerous theatre companies.

Danny is an accomplished performance poet, playwright, voice over artist, and performance collaborator. He loves acting dearly, and has a passion for teaching  those new to the craft and those who want to be reinvigorated! He is so happy to be lecturing in a department full of wonderful and accomplished theatre artists.