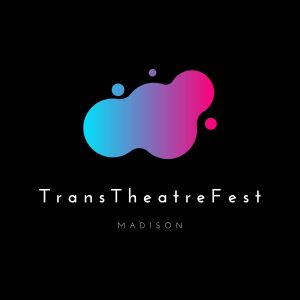 TransTheatreFest – Madison is a free virtual festival of new work celebrating trans and gender non-conforming voices through theatrical storytelling. TTF’s goal is to give a platform to transgender and gender non-conforming playwrights, directors, actors, and other creative team members. TTF was founded by Orion Lee Risk, a Master’s student in Interdisciplinary Theatre Studies at the University of Wisconsin-Madison. TTF is being produced by two student organizations at UW-Madison: UTA (Undergraduate Theatre Association) and IMT (InterMission Theatre). This year participants include artists from all over the country. TransTheatreFest – Madison is thrilled to be working with such a diverse range of artists and to be providing a platform to the trans community for their stories to be told.

TransTheatreFest starts March 13th and 14th at 12pm CST each day. You and your friends, family, and pets can watch and support the festival by visiting transtheatrefest.org! TTF has six AMAZING shows ranging from 10 minutes to full-length productions, and we’d love to have you in the audience! 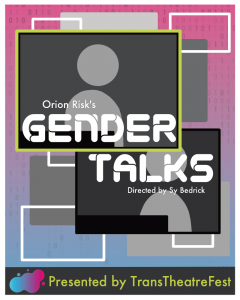 GenderTalks depicts real conversations between trans, nonbinary, and gender-nonconforming people speaking candidly about their experiences of gender-identity during COVID-19. What follows documents a series of live Zoom calls that took place during the Summer of 2020, with invisible audiences of any gender listening in. Dialoging pairs, many connecting for the first time, were from Dane County, Wisconsin, the home of the University of Wisconsin–Madison, and Black Hawk County, Iowa—a community ravaged by the epidemic, spiked by an outbreak at a local meat-processing plant. The play remixes the original virtual conversations into a real-life collage of euphoria and dysphoria, longing and joy, isolation and connection. 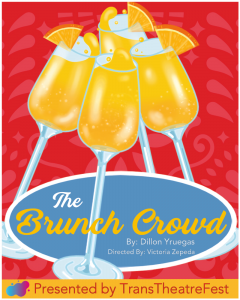 The Brunch Crowd, written by Dillon Yruegas and directed by Victoria Zepeda.

Curious how transgender people of color go about their daily lives? Spoiler alert: they don’t talk about ~the surgery~ or anything else that the Cis seem to be so obsessed about. They go to brunch and drink too many mimosas, just like you! In The Brunch Crowd, four twenty-something queer trans artists meet at their favorite Mexican brunch spot in heavily gentrified Austin, Texas. 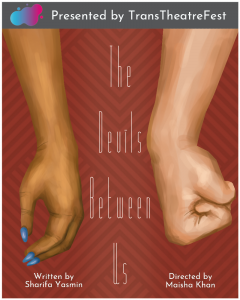 The Devils Between Us, written by Sharifa Yasmin and directed by Maisha Khan.

Deep in the boonies of South Carolina; George, a closeted young man, is working to keep his late father’s business up-and-running. Shortly after taking over the family business, George is visited by an old friend…actually, childhood lover. A young Muslim named Latif, has returned as Latifa to take care of her estranged father’s funeral. The rekindling of their past, forces them to confront the devils of their past. George and Latifa discover that in order to overcome their past they will need to rely on each other. 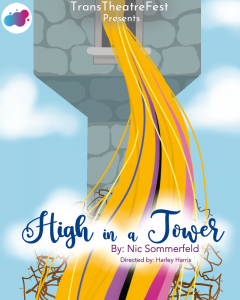 High in a Tower, written by Nic Sommerfeld and directed by Harley Harris.

High in a Tower takes place in a (more progressive) fairytale land and features Prince Gareth’s quest to rescue Rapunzel…who actually isn’t in the tower anymore because Rapunzi has taken her place. It’s a comedic retelling of a classic fairytale that pokes fun at the patriarchy and heteronormative society. 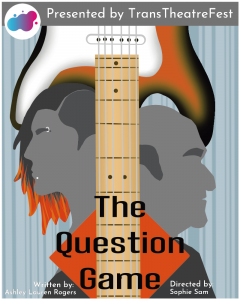 The Question Game, written by Ashley Lauren Rogers and directed by Sophie Sam.

Heavy Metal rocker Amber arrived back home after nearly two decades of being estranged from her father, Arthur, for being transgender. Now, against her better judgement, she arrives at the run-down seaside New England home at the behest of her father to give him one last opportunity to tell her a secret  which he vowed he would only share in person. When Amber enters the home she finds her father intoxicated, belligerent and uncooperative. Throughout the night as Amber and Arthur trade insults, heart-to-hearts and develop a bond that neither had before Amber wonders: “What is her father’s secret?”,  “Why did she allow him back in her life?”  “What other spirits haunt the relationship?” 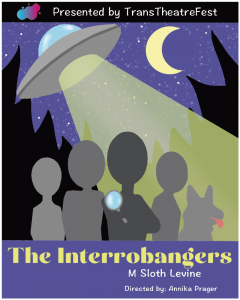 The Interrobangers: Mystery of the Foggy Bluffs Monster, written by M Sloth Levine and directed by Annika Prager.

The town of Foggy Bluffs has been haunted by ethereal apparitions for decades. Four kids spend their weekends investigating cryptids and solving cryptic codes; unmasking the monsters for what they truly are… old white people committing insurance fraud. When local teen investigator, Zodiac DuMaurier, disappears from the woods while running a routine investigation a local man is charged with Zodiac’s kidnapping. However, when Zodiac reappears just as mysteriously two weeks later Zodiac maintains he was abducted by aliens. When the man arrested for the kidnapping is found murdered, Zodiac reunites with the old gang to solve one more mystery. The teens experiment with drugs, sexual identity, and conspiracy theories while investigating all leading them to the question: “What would you rather find, Monster or Man?”

Join us on social media! Use the hashtag #transtheatrefest2021 while you’re watching the show and we’ll give you a shoutout on our Instagram story!